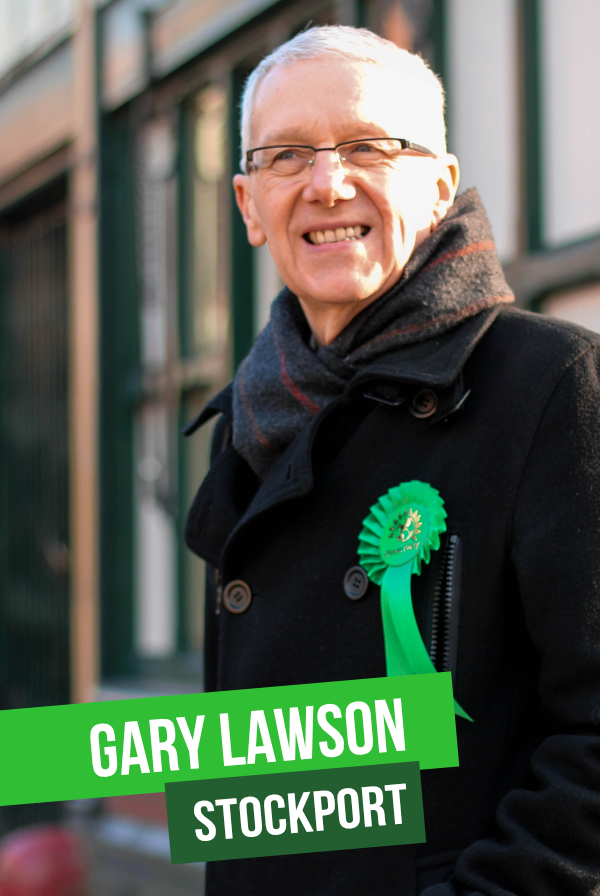 Gary says: “I am a sixty four year old retired Church of England clergyman living in Heaton Chapel who believes that only the Green Party has the right policies to meet everyone's needs (but not everyone's greed) and to minimise the impact of climate change and air pollution in order to protect our children and grandchildren.  I was the Green Party's candidate for Stockport in the last General Election and have also been a local election candidate a number of times during the twenty five years that I have been a member of the Green Party and lived and worked in Greater Manchester.

If elected my first priority would be the needs of young people, whose opportunities have been blighted by the economic crisis and by austerity and other government policies.  I fully support the Green Party's policies to fund our schools adequately and to bring back grants for students to cover both fees and living costs.  I want to see more houses built both to rent and to buy by local councils and housing associations as well as the private sector.  And I want to create more jobs by reversing the cuts in public services, including the N.H.S.,and by an emphasis on repairing and recycling things instead of throwing them away.  We also need a realistic debate about the future of work and the idea of a universal basic income, as jobs are increasingly lost to robots and technology over the next twenty years.

The Green Party is the only party which grounds their commitments on the recognition that the natural world is the source of all our economic wealth and which fully integrates economic and environmental policies.  Other parties prioritise economic growth and consumerism above all else and endlessly delay action on air pollution and climate change.  I am in favour of government support for renewable energy and higher taxes on the extraction and burning of fossil fuels.  I believe that leaving fossil fuels in the ground is essential if disastrous climate change is to be avoided and am therefore against fracking.

Just before I retired, all the churches for which I was responsible, in a reasonably well-off area, set up food-banks for local people.  That this should be necessary in one of the wealthiest countries in the world is wrong.  I have seen the harm which benefit cuts and sanctions have done both to the poor and to the disabled.  I want them to be reversed.  And I want the better off, as well as multinational companies, to pay their fair share of taxes.

On the divisive Brexit issue, I fully support the Green Party's stance that, when the terms on which we would leave the E.U. have been negotiated, there should be a second referendum, in which people should be able to vote either to accept the terms or to remain in the E.U.”