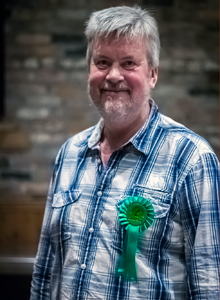 Stockport Green Party have unveiled Graham Reid as their General Election candidate in the Hazel Grove constituency – the first time they have contested the seat since 1987. Graham is a 68-year-old former postal worker who has been active in the local Green Party for more than 20 years.

Graham says: “The world is in turmoil but I think that neither the Conservative nor Labour parties have solutions to the problems we face. The Tories have always ignored the plight of lower-skilled workers, while the Labour Party, in supporting these workers, have added an ever-increasing burden on industry, making it less competitive in the world market. The Green Party’s solution is to introduce a Citizens' Income for all British adults and substantially reduce the red tape imposed on industry. We also need to introduce a Land Value Tax and reform the banking system. Introducing Green Party economic policy will eliminate the need for an austerity programme.

“Other issues that require our immediate attention include the desperate need to build more social and affordable housing and reduce housing costs. We also need to oppose fracking and to put all our available resources into renewable energy. And we should stop all unnecessary interference in health and education and let the professionals get on with the job.”