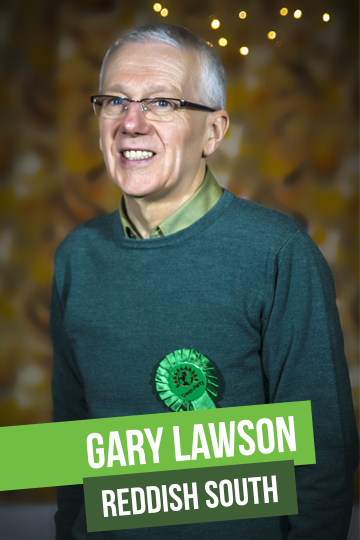 Gary Lawson is a recently retired Church of England vicar, who was the Green Party's candidate for Stockport in the 2017 General Election, and has been a member of the Party for over twenty years.

Gary says: "I am standing in the Ward where I live, Reddish South, and am focused on the concerns of other residents of the Ward. The surveys of residents that we have recently carried out reveal that the main issues are the lack of youth facilities and anti-social behaviour by people who live in the area or come into it. Speeding traffic on residential roads, dog fouling on pavements, litter and the dumping of rubbish were also identified as things which spoil our neighbourhood.

As a Councillor, I would also be committed to tackling the threats to our children and grand-children's futures here in Stockport as elsewhere, including the air pollution which damages their health, the alarming quantity of plastic being dumped in our environment and, above all, climate change. David Attenborough has warned us that we have perhaps ten or, at most, twenty years to act to avoid disastrous climate change and Council policies fail to recognise this urgency. A Green councillor on Stockport Council - at present there isn't one - would accelerate the changes we need to make, and I am working hard to bring that about."