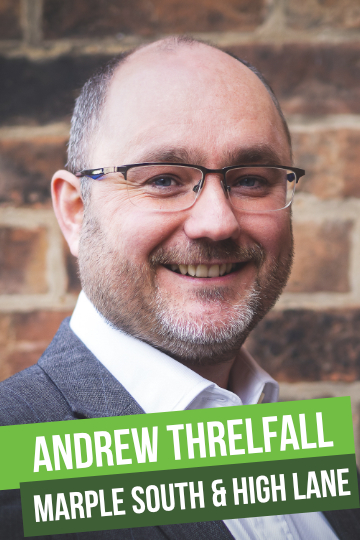 I live in High Lane with my wife and two children, I love the sense of community and can often be found walking along the canal or exploring
some of the amazing places we have locally. Occasionally I'll be found further afield hiking in the Peak District.

I founded a software company that works with NHS community services - it's rewarding, and I feel honoured to be able to work with an institution as valuable as the NHS.

I’ve been a member of the Green Party for over 20 years. I was drawn to it as it was the only party that held social and environmental justice at its heart. Now I’ve a young family, these core values mean even more to me.

I believe the majority of people hold hope in these same core values, values which in recent times are being attacked more than ever with austerity; the attack on the poor, disabled and most needy; the demonization of minorities; and the apathy for the immediate threat to our environment and existence.

I believe that a vote for the Green Party is a positive one, and many years after I joined, those core values are more important than ever.