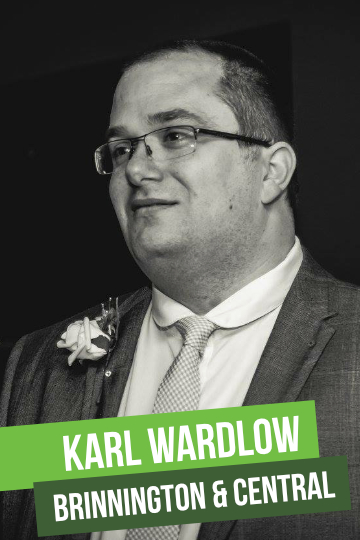 I’ve been a member of the Green Party since 2008 and am originally from Manchester, moving to Brinnington in 2016. I joined the Green Party as it was the only main party that believed in social justice and looking after everyone.

What is being done to the NHS is particularly important to me as I have suffered from bouts of serious ill health in the past and have witnessed the tremendous work of the NHS staff at close quarters.  We, as a country, must not allow a private health system to be established as it will mean the suffering of millions.

I was a candidate in Manchester local elections for several years until my move to Brinnington and I’ve noticed the other parties take votes and seats for granted whereas we in the Green Party believe that people in their local area where possible should have the power to make that decision.

I have been active on social media supporting and contributing to campaigns by the baby loss charities Tommy's, Cradle and The Miscarriage Association after my wife and I sadly have been through three early miscarriages. I have tried to raise awareness ever since to improve aftercare for those couples who have experienced miscarriage and baby loss. I also spoke at one of the consultation meetings when Stockport NHS considered cutting IVF provision which ultimately didn't happen. Alongside Marc Harder from the charity Sands after lobbying Stepping Hill hospital, I have obtained a public commitment for the hospital to sign up to the National Bereavement Care Pathway to improve the quality of care parents suffer after pregnancy and baby loss.